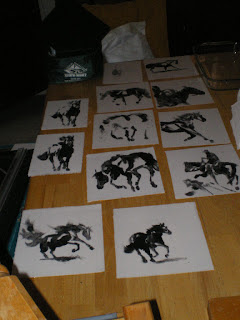 People sometimes see a person working at art and say: “Oh…you are so talented. I can’t even draw a stick figure….or even a straight line for that matter.”

Well, for one: L.S. Lowry, the Mancunian English painter, hit on an idea and painted match-stick figures. One of those paintings sold recently for 602,400 (Pounds Sterling) at auction recently.

And I don’t know an architect who doesn’t use a straight edge if they want to see straight lines.

Do people listen to what they are saying? My guess is that they “think” they are being kind…or chatty. However what happens, in fact, is that they bring the process of art down to only one level. With one statement they negate all the hours and hard work people put into their aesthetic attentions.

I wonder if they realize that many artists (me included) have studied and worked at art longer than most of their doctors have worked in medicine.

The word “talent” is defined as: a person who possesses unusual innate ability in some field or activity. I think there are very few working artists that feel like they have “talent” that they can just fall back on when their art is not “working” in the studio.

I can believe that one could have a talent to:

“I put my heart and my soul into my work, and have lost my mind in the process.” Vincent van Gogh. (And by the way…thank you Kevn Lambson for creating such a brilliant book ARTSY QUIRKSY – Seeing Things Sideways, through Idear Studios…klambson@idearstudios.com for that referenced quote).

Understand that after an artist has died his work becomes distilled and hopefully all the bad stuff has been destroyed (unless it has been stolen out of your trash by “an adoring fan”….I am sad for Robert Rauschenberg having to sue over his trash…however free advertising in the form of editorial is not THAT bad). And then the art historians can get on with their gig of explaining art and its place in history.

I have a new “talent” for working on more than one painting at a time. I am finding it MOST useful in not getting frustrated or focusing too much on what is NOT working and just getting on to the next pastel with the hope that something will work.

“Creativity is allowing yourself to make mistakes. Art is knowing which ones to keep.” Thank you Scott Adams (American Cartoonist).

So do some artists have talent? I don’t think talent has ANYTHING directly to do with art. Having talent as part of the passion and dedication to the process of art…maybe.

And my new mantra (I would like to thank the great writer Steve Martin):
BE SO GOOD THEY CAN’T IGNORE YOU.

It’s been years since I moved home to New Mexico from living 10 years in Europe. I still hear the voices of the living artists and the historical masters of art that I studied with in England, France, and, especially, Italy. After winning a scholarship from the Scottsdale Artist’s School to work with Howard Post .I ended up rushing headlong into a passion with pastels. The freedom I have whilst working in pastels keeps me enthusiastic about painting all the time.My gestural nudes are included on Ruth Block's "Painting the Figure in Watercolor" videos. Bill Herring helps me keep my aesthetic river within its creative banks. Color and composition keep me focused and developing better paintings. There are just not enough hours in the day to paint it all.” www.nancemcmanusstudio.com AMSTERDAM WHITNEY GALLERY – Chelsea - NYC CEDAR STREET GALLERY – Honolulu NEW GROUNDS - Albuquerque PARK FINE ART - Albuquerque CONNECTICUT PASTEL SOCIETY Signature Member PASTEL SOCIETY NEW MEXICO Signature Member ARTIST-IN-RESIDENCE - Avian Ambassadors-Flights of Education